As highlighted earlier by News Website royalpatiala.in that “Operation Lotus” is being carried by BJP in upcoming SGPC president elections, the same came clear when today the official youtube page of Prime Minister Narendra Modi . He has shared a file photo of his with former shiromani gurudwara prabahndak committee president and president shiromani akali dal (women wing) Bibi Jagir Kaur before going to pay obeisance at a Kirtan darbar organized on the eve of 553rd Gurpurab of Guru Nanak Dev ji in New Delhi.

The photo has sent a clear message that Bibi Jagir kaur is being supported by the BJP in the upcoming SGPC president elections on November 9,2022 and has created ripples in the Punjab politics.

Earlier in the day, Shiromani Akali Dal (SAD) had expelled Bibi Jagir Kaur former women’s wing leader and three-time former Shiromani Gurudwara Parbandhak Committee (SGPC) president Bibi Jagir Kaur over alleged anti-party activities. This was after Jagir Kaur failed to appear before a disciplinary committee headed by former minister and senior akali dal leader Sikander Singh Maluka and reply to a show-cause notice after the party suspended her on November 2. The only woman president of the SGPC so far, she said her expulsion from the party is unconstitutional. 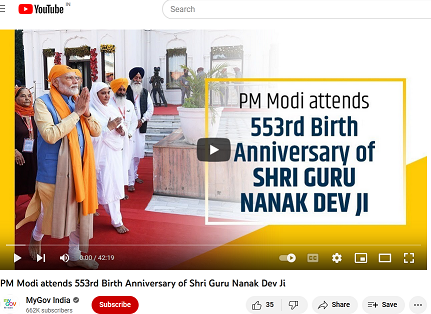 Last week Shiromani Akali Dal (SAD) had urged President Droupadi Murmu to dismiss Iqbal Singh Lalpura from the post of chairperson of National Commission for Minorities alleging that he was directly interfering in the religious affairs of the Sikh community by trying to disband the Shiromani Gurdwara Parbandhak Committee (SGPC).