Is Congress fielding former working president of PPCC from Patiala ?

Speculations are rife in political circles that congress has finalized the name for Patiala (Urban) assembly seat and may announce, any time from now.

As per sources, the congress high command has zeroed on former working president of Punjab Pradesh congress committee and seasoned leader Lal Singh to be their candidate from Patiala (Urban). A congress worker said “today evening, many local congress workers went to Lal singh residence and congratulated him and assured his victory from Patiala’

He will face Capt Amarinder Singh, who is contesting on Punjab Lok Congress ticket from Patiala (Urban).

Congress is going to relax his “One Family One ticket” norm, as a special case for Lal Singh. The party has already announced the candidature of his son Rajinder Singh, who is a sitting MLA from Samana. 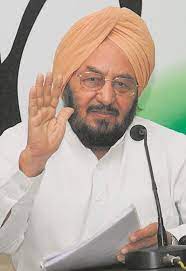 “A revolt is foreseen within the party, as some other senior leaders may raise their voice against the party special treatment to veteran leader Lal Singh, giving him a ticket and to his son too” said a senior leader.

In 2017, the party gave ticket to his son Rajinder Singh from Samana, as the party had adopted “one family one ticket” rule. But, after the formation of Capt Amarinder Singh government in 2017, he was made chairman of Punjab State Agricultural Marketing Board and he is the Sr. vice president of Punjab Pradesh Congress Committee.