Annual General Body Meeting of Chandigarh Football Association was held on 29-09-2022 at 7.30 PM at Hotel Park Grand, Sector-43, Chandigarh to elect New Office Bearers for the financial year 2022-26. Twenty units / clubs / teams attended the General Body Meeting and elected new team of officials for the year 2022-26. The election process was conducted with strict adherence to the guidelines provided in the National Sports Development Code 2011 and the Returning Officer to conduct the proposed election was Justice (Retd.) Kuldip Singh who conducted the election in a free and fair manner.

Observers from All India Football Federation New Delhi, Chandigarh Olympic Association and Chandigarh Sports Department were present during the election process. Justice (Retd.) Kuldip Singh inform the house that the intimations regarding the conduct of elections for new office bearers for the year 2022-26 were sent to all affiliated units / club / teams. And the last date for filing the nomination was on 23-09-2022 and for withdrawal of nomination form was 25-09-2022. All the intimations were sent by the registered post. 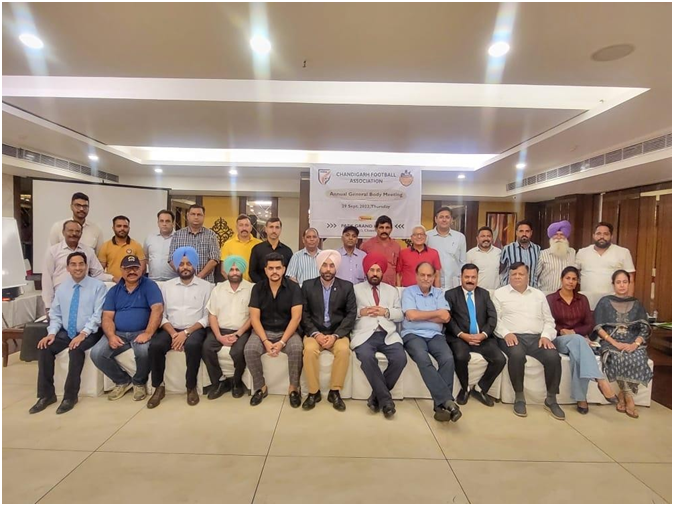 After the elections process was over the Presiding Officer invited the newly elected President K.P. Singh to take over the charge and preside over the Annual General Body meeting of the Chandigarh Football Association for further work.

A meeting of the newly elected Executive Committee of Chandigarh Football Association was held on 29-09-2022 immediately after the Annual General Body meeting is over under the presidentship of Adv.K.P. Singh. He welcomed the newly elected members of the Executive Committee of Chandigarh Football Association and called upon them to work sincerely and efficiently for the promotion and development of Football in City Beautiful as a team.

KP Singh elected president of Chandigarh Football Association. He also proposed the name of Rakesh Bakshi for the post of General secretary of Chandigarh Football Association for the year 2022-26. All the members of the executive committee approved the proposal of the President unanimously. As decided in the meeting two Women National Players were also co-opted as Executive Committee Members and their names are Neetu Hooda and Anjana Thakur. The meeting ended with the vote of thanks to the chair.