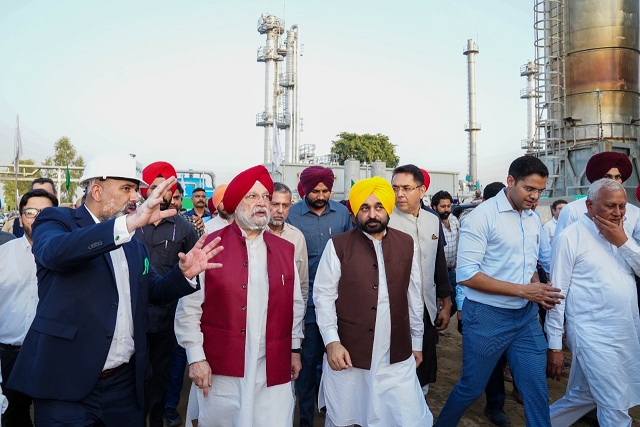 Punjab got the distinction for establishing India’s largest Bio-Energy plant; Mann, Puri dedicated it to the nation

Punjab got the distinction for establishing India’s largest Bio-Energy plant; Mann, Puri dedicated it to the nation . Describing it as a red letter day for the state, the Chief Minister said that this step will go a long way in wiping out the menace of paddy straw burning from the state. He said that Verbio Group has strong association with state as its Indian subsidiary Verbio India Private Limited as this is largest biofuel (Biomethane/ Bio-CNG) production units in India with 33 TPD (tons per day) and 550 TPD per year of Bio-CNG capacity adding that this Bio-CNG project of 80,000 m³/day capacity will produce biogas by anaerobic digestion process and is a great way to solve the problem of stubble burning. Bhagwant Mann said that the annual straw consumption in this unit will be 1.30 lakh ton adding that it will help in solving the vex problem of paddy straw burning.

The Chief Minister said that set up over an area of 20 acres of land this unit will contribute to an annual reduction of 1.50 lakh Metric Ton of pollutants and 20,000 MT of fly ash currently produced due to paddy straw burning. He further said that this unit will also give employment to 1000 youth and affect more than 5,000 families. Bhagwant Mann said that the acreage of soil enriched from Biomanure will be 2150 acres. 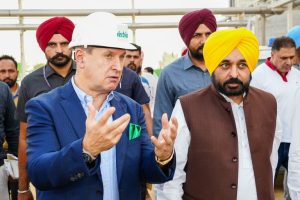 The Chief Minister said that with the intense cropping pattern of wheat and paddy, Punjab is facing the problem of disposal of crop residues particularly the paddy straw and stubble which have no other usage. He said about 18 Million Ton of the straw/stubble is generated every year but only 5 Million Ton is being used in biomass power plants, industrial boilers and plywood industry. Bhagwant Mann said that the rest of 13 Million Ton is being burnt by farmers in the fields as no other safe disposal techniques are available.

The Chief Minister said that in Punjab paddy cultivation is done over 75 lakh acre of land. He said out of this the farmers having 37 lakh acres don’t burn the paddy straw. However, Bhagwant Mann said that some major steps need to be taken for ensuring management of the remaining 38 lakh acres.

The Chief Minister said that it is in consonance with the commitment of the state government to make Punjab clean, green and pollution free. Quoting verse ‘Pawan Guru, Paani Pitaah, Mata Dharat Mahat’ from Gurbani, he said that the great Gurus have equated air (pawan) with teacher, water (paani) with father and land (dharat) with mother. Bhagwant Mann said that now the time has come when we must imbibe the teachings of Gurbani in our lives for restoring the pristine glory of the state by resolving not to burn crop residue.

The Chief Minister said that the state government will leave no stone unturned for this noble cause. He said that the state government has taken several steps to mitigate the problem of stubble burning adding that apart from this two more Projects of total capacity 14.25 ton CBG per day are likely to be completed in 2022-23. Bhagwant Mann said that these projects will consume about 16.5 lac ton paddy straw per annum for production of 492.58 ton Compressed Biogas per day.

The Chief Minister said that there is a huge potential of CBG projects based on agro-waste in the state of Punjab. He envisioned that about 200 more projects of capacity 10 TPD each can be set up in the state of Punjab for which the State Government is providing various incentives under State NRSE Policy-2012. Similarly Bhagwant Mann said that the Ministry of Petroleum & Natural Gas, GoI has also notified the National Policy on Biofuels in June 2018 which emphasizes the need for promotion and development of projects for production of the biofuels.