“After the humiliation filled defeat in the last assembly elections, pardhan sahib (Sukhbir Singh Badal) has no big work to do; still he is not coming on time. He must have changed his behavior by now. But his working style has not changed” said a party leader on the condition of anonymity.

“We were asked to reach by 3 pm  on November 5,2022 at senior party leader Prem Singh Chandumajra residence as shiromani akali dal president Sukhbir Singh Badal is coming to meet the party workers. I was out of station. As soon as I got the message, I rushed back to Patiala without doing my personal work and reached the meeting venue on time. But our president is coming at 6:00 pm, three hours late. This is a strange that he has not learnt anything from past mistakes. The party is going through rough times and its president is coming three hours late to meet the party workers” added a shiromani akali dal party leader from Patiala on the condition of anonymity. 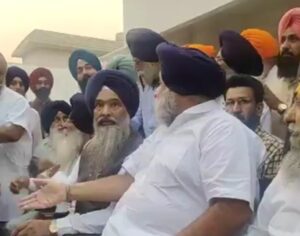 Sukhbir Badal’s ‘late Latifi’ irks party leaders. His father and senior Badal had also take a dig at him earlier for his late coming behavior.

Sukhbir Badal visited Patiala on November 5,2022 to meet the local SGPC members. He asks them to vote for the party candidate Harjinder Singh Dhami for the upcoming president elections. In a brief stay, he interacted with media for few minutes; made joining a local BJP councilor into akali dal.