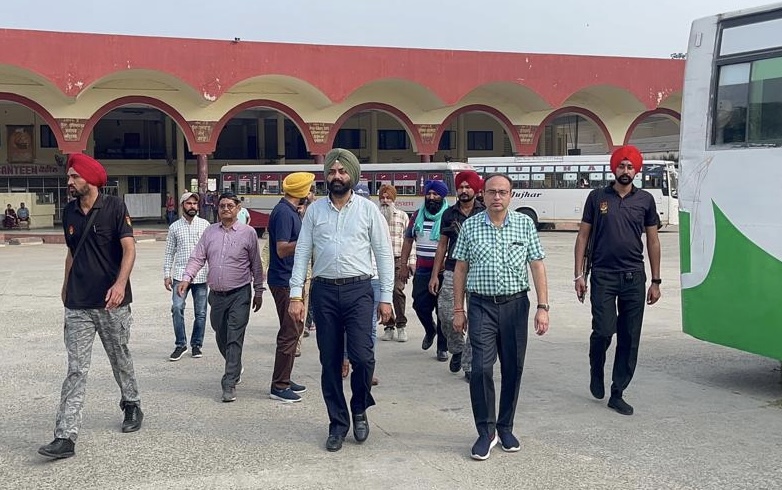 At Sri Anandpur Sahib Bus Stand, the Transport Minister directed the depot officials to immediately start the public bus service between Sri Anandpur Sahib and Amritsar, the two centers of Sikhism, from tomorrow i.e. October 10. He inquired about the details regarding non-operation of buses on this route at the General Manager’s office and instructed the General Manager Paramvir Singh that there is anger among public due to non-operation of buses, so it should be ensured that buses continuously ply on this important route in future.

Reviewing the cleanliness at the bus stand, shops and toilets, the Transport Minister directed the General Manager to pay more attention towards cleanliness of the bus stand. Bhullar, while interacting with the passengers and listening to their problems, said that Chief Minister Bhagwant Singh Mann is paying much attention for making the public bus service more reliable and comfortable.

The Transport Minister also paid obeisance at Takht Sri Kesgarh Sahib. He was bestowed the siropao by the management.

While visiting the bus stand and bus depot at Nangal city, Transport Minister Bhullar enquired about the income deficit of the depot and reason for the stationary buses. The Minister was apprised that due to the construction of a RoB over the railway crossing on the Una highway, many routes are closed and around 18 buses have been shifted to Hoshiarpur and Ludhiana, due to which the income has decreased. The Cabinet Minister, while taking stock of the stationary buses in the Depot, instructed the General Manager Gursewak Singh Rajpal to immediately making arrangement for passing of the buses so that these can be operationalized and the loss of income of the depot could be met. He also instructed the GM to ensure that there should be no shortage of buses’ spare parts in the depot.

Transport Minister Laljit Singh Bhullar conducts surprise checking of Bus Stands.On the demand of the depot employees, the Transport Minister assured that the concrete bus washing dug will be constructed soon. He also said that he will visit the bus stands across the state in coming days and take every possible step to make the public bus service meet the aspirations of the people.