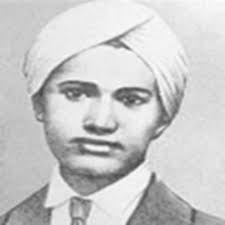 Kartar Singh Sarabha, who inspired Shaheed e azam Bhagat Singh, to serve his mother land, to revolt against British colonial India for the sake of an Independent country, was born on  24 May 1896, in Ludhiana, Punjab India into a Grewal Jat Sikh family in village Sarabha, district Ludhiana, Punjab.

He was an Indian revolutionary and just 15 years old when he became a member of Ghadar Party and then he came up as a leading luminary member and started fighting for the independence movement. He was one of the most active members of the movement and was the most famous and reputed martyrs of Punjab. He was executed for his role in the movement when he was merely 18 years old, as the court observed that Kartar Singh was the most dangerous of all the rebels. “He is very proud of the crimes he committed. He does not deserve mercy and should be sentenced to death”. Kartar Singh was hanged in the Central Jail of Lahore on November 16, 1915.H

His father was Mangal Singh and his mother was Sahib Kaur. Kartar Singh was very young when his father died and hence his grandfather Badan Singh Grewal brought him up. After receiving his initial education in his village, Kartar Singh entered the Malwa Khalsa high school in Ludhiana; he studied there until 8th standard. Then he went to his uncle (father’s brother) in Orissa and stayed there for over a year. During this time he took lessons for standard 10 from a high school in Ravenshaw University, Cuttack, Orissa. 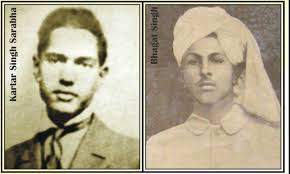 After coming back to his grandfather, his family decided to board him to the United States for higher education. He sailed to San Francisco in July 1912. His association with Nalanda club of Indian students at Berkeley aroused his patriotic sentiments and he felt agitated about the treatment immigrants from India, especially manual, worker received in the United States.

Bhagat Singh was inspired by him.“On Bhagat Singh’s arrest, a photo of Sarabha was recovered from him. He always carried this photo in his pocket. Very often, Bhagat Singh would show me that photograph and say, ‘Dear mother, this is my hero, friend and companion.’ ” -Bhagat Singh’s mother.