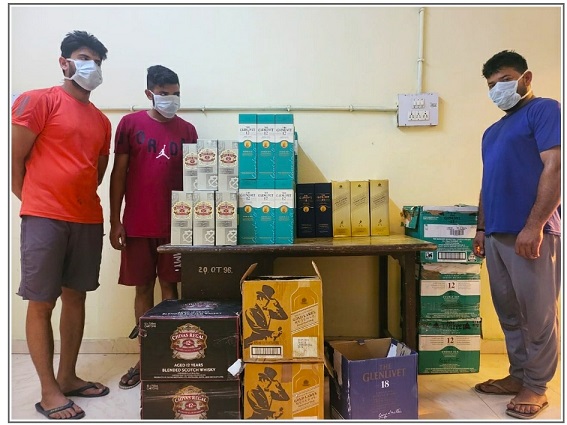 An organized module of liquor smugglers was busted by Excise department, Punjab and district police Fatehgarh Sahib. The gang was involved in filling smuggled cheap liquor from Chandigarh into expensive imported Scotch brands. 4 members of gang were arrested with fake liquor, which includes 4 cases of Chivas Regal, 4 cases of Glenlivet and 2 cases of Gold label reserve.

Excise Commissioner Varun Roojam reiterated that the Punjab Government has zero tolerance policy as far as smuggling of liquor or any illegal activity relating to Excise is concerned. He said that action would be taken as per law against the accused.

Divulging the details, Joint Excise commissioner Naresh Dubey informed that secret information was received that an organized gang is involved in smuggling cheap liquor from Chandigarh into Punjab and further fill it in bottles of expensive scotch brands. With the coordinated efforts of Special Operation Group (SOG) of Excise department and district police Fatehgarh sahib intelligence inputs were gathered

Two days back, the team got a tip that the accused Kundan visht S/O Mohan Singh R/O H. No. 226, Village Kajhedi, Chandigarh will be supplying the fake scotch liquor along with his gang members.  In order to catch the accused red handed, teams of special operations group of Excise and Police swung into action and special nakabandi was done. The teams got success when two cars Tata Tiago CH01BV9460 and Swift HR51BD5918 were intercepted on naka near khamano and four members of gang Kundan Visht, Harshwardan S/o Satishwer Parshad R/o H.No. 19, Defence Colony Ambala, Pardeep Singh S/o Jagdev Singh R/o Village Naryangarh, District Jeend, Haryana and Jasmin Kaur D/o Rajveer Singh R/o Sangrur were arrested from the spot. The team found 4 cases of Chivas regal, 4 cases of Glenlivet and 2 cases of Gold label reserve in the consignment being ferried. During investigation, the accused also admitted that they buy empty bottles of scotch brands from different scrap dealers of Mohali and Ludhiana area and they are also involved in this racket. The police teams are on pursuit of these dealers and their premises are being raided to arrest them.

Cheap liquor in expensive imported Scotch brand bottles; Punjab excise breaks nexus . An FIR No.60, dated 26-05-2022 was got registered at Khamano Police Station against  Kundan Visht, Harshwardan, Pardeep Singh and Jasmin Kaur under Section 61/1/14 and 78(2) of Punjab Excise Act and Sections 420 and 120-B of IPC.