Name the corrupt and we will ensure strict action against him: CM exhorts people

Reiterating the firm commitment of his government to weed out the menace of corruption from the state, the Punjab Chief Minister Bhagwant Mann called upon the people to name the corrupt officer and the state government will ensure exemplary punishment against him.

The Chief Minister, while interacting with media persons after a surprise check at the local Tehsil complex and the Suvidha centre, said that corruption cannot be tolerated at any cost. He said that if anyone seeks bribes from the people to do any work then they must expose the name of such officer for the severest of severe action. Bhagwant Mann said that as a part of its anti-corruption tirade his government has already put several corrupt officers behind the bars.

The Chief Minister appealed to the people to play a proactive role in making state corruption free. He said that this menace can be eliminated only with the active support and cooperation of people. Bhagwant Mann assured the people of the state that the Aam Aadmi government will leave no stone unturned for this noble cause.

The Chief Minister further said that his government has already set the wheels in motion to bring numerous reforms in the working of the various departments. He said that the sole motive is to streamline the functioning of these departments to ensure zero inconvenience to people in availing the benefits of government schemes. Bhagwant Mann said that it will take time to rectify the system that has been jeopardized for the last more than seven decades. 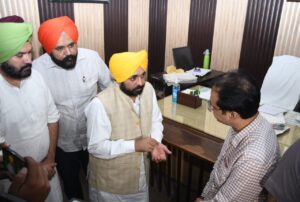 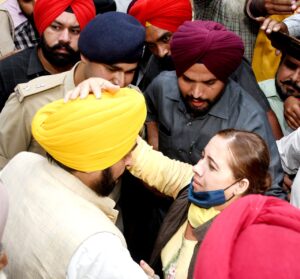 Name the corrupt and we will ensure strict action against him: CM exhorts people. The Chief Minister while replying to a query pertaining to the illegal colonies said that no person will be rendered homeless. He said that the state government is already contemplating this issue and a solution to this will be worked out. Bhagwant Mann said that the people will not have to suffer due to the sins of the previous governments.

The Chief Minister asserted that the entire process of ongoing procurement and lifting of the paddy crop will be completed soon. Reiterating the firm commitment of the state government to procure every single grain of paddy, Bhagwant Mann said that he is personally monitoring the entire procurement process to ensure that farmers do not face any sort of inconvenience. He said that during the current procurement season not even a single complaint has been received from the farmers across the state.

The Chief Minister said that the paddy straw burning is a joint issue involving several states and it should be resolved jointly. He said that the union government is playing cheap politics by blaming the hard working and resilient farmers on this issue. Bhagwant Mann said that his government had sent a detailed proposal for the resolution of the issue to the Union government but the latter has blatantly rejected it.

The Chief Minister said that the Air Quality Index of Faridabad and other cities of Haryana is worse than Punjab but centre is putting the onus on Punjabi farmers, which reflects the anti-farmers and anti-Punjab mindset of the Union government and BJP. Bhagwant Mann said that the armchair economists sitting in Air conditioned offices at Delhi are not giving any solution to the farmers but they are continuously bringing disgrace to them by falsely accusing them of burning the paddy.  He said that humiliation and injustice towards Punjabi farmers is totally unwarranted and undesirable.

Earlier, the Chief Minister visited the Tehsil office and Suwidha centre during which he had detailed deliberations with the staff and people. He asked the people about any sort of problem being faced by them to avail citizen centric services of the state government. Bhagwant Mann also asked the staff to ensure that people do not face any problem in availing the services at the centre.