Banwarilal Purohit, Governor of Punjab, deliberated on the Indian justice system. He elaborated on relationship between accused and the state in liberal democracies.  Purohit said,“Victimology is a language of empathy. It is high time that the victimological foundations must find a place in our criminal justice administration.”

Governor Power-Pardoned a mother accused of killing his son after she completed 12 years of life imprisonment- Purohit. While delivering his inaugural address, Purohit said “before I  leaving my office for this function, I signed a file pardoning a lady accused of killing his two month old son in a fit of rage. Few years ago she had killed the infant after fight with her husband. She is in the jail after the lower court convicted her for life imprisonment. But her trail is still going on at Supreme Court. The apex court will either acquit her or convict her. But, she has already served 12 years imprisonment. I got the application from her for pardoning and I pardoned her.”

Purohit cited the  Supreme Court of India while alluding to the case of Jagjeet Singh v. Ashish Mishra. He exhorted lawyers to reserve time for providing legal aid to the poor and underprivileged. He emphasized that cognitive training of functionaries and appropriate framework for empirical investigation of victimization of vulnerables could be plausible alternatives to avoid delay in justice. Trial delays thwart the safety of victims deprived of justice. He narrated instances from the court of King Vikramaditya and Jahangir. He congratulated CCV, RGNUL for organising conference on pertinent issue related to the rights of victims of justice.“I am sure that deliberations of the conference in form of paper would aid the processes of justice,”  Purohit said.

Governor Power-Pardoned a mother accused of killing his son after she completed 12 years of life imprisonment- Purohit suggested the delegates to forward the proceedings of this conference to the Supreme Court with a suggestion “deliver the justice in time. Don’t linger on the delivery of justice to the victims.” 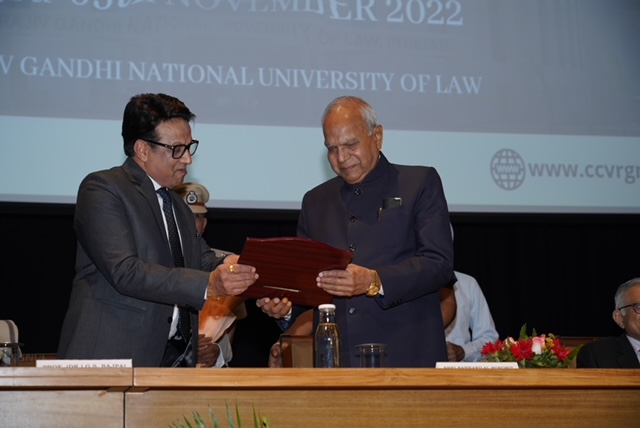 Prof. Anand Pawar, Registrar, RGNUL extended a vote of thanks. He appreciated the endeavours of all collaborators and support of the district administration for conduction of the conference. 200 delegates from India, Germany and Bangladesh would present papers in 20 technical sessions.