In a serious allegation, a complaint was filed against Gulzarinder Singh Chahal, President, Punjab Cricket Association (PCA), and renowned Chartered Accountant of Patiala, before Ethics Officer Inderjeet Singh, Retd District & Sessions Judge, alleging that Gulzarinder misused his position and status to appoint the afore mentioned firm as auditors of PCA for 2022-23.

The complainant, Manjinder Singh, alleged that Gulzarinder had individual and prior personal commercial relationship with the auditors appointed by him. He said, “The General Body of PCA on May 26, 2022, in its AGM had authorised the President to appoint the auditors for 2022-23 and fix their remuneration. On the same day, Gulzarinder appointed that renowned Chartered Accountant of Patiala and fixed their remuneration as Rs10 lakh + GST. The appointment of the auditor was made without following any due process, no requests were made for application from eligible persons, no criterion was prescribed and no vetting process was undertaken.” 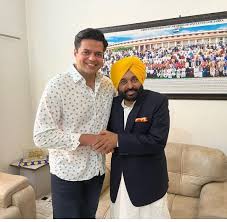 Manjinder had requested the Ethics Officer-cum-Ombudsman on October 4, 2022, that Gulzarinder should be barred for life from involvement with Cricket and be immediately removed as President PCA. Thereafter, the Ethics Officer had issued notice to the respondents to appear before him on October 28, 2022, wherein Gulzarinder had claimed that as he had resigned from the post of PCA President on October 13, 2022, the proceedings against him should be dropped.

Punjab Cricket Association former president Gulzarinder Singh Chahal once again under scanner. On the day of the hearing, it also transpired that the Ethics Officer-cum-Ombudsman Inderjeet Singh had been appointed by Gulzarinder on the same day as he had been appointed PCA President without following any selection criteria.

Therefore, in the interest of justice, Manjinder Singh has requested the ethics Officer-cum-Ombudsman to give a disclosure statement before further proceeding in the matter that he has no direct or indirect relationship or acquaintance with Gulzarinder or his family prior to or after your appointment as Ombudsman-cum-Ethics Officer, PCA.. He highlighted that his request was also based upon the fact that during and even after the hearing, the ethics Officer-cum-Ombudsman had expressed that nothing survives in the complaint after the resignation of the president.