As per the available information “ANSH” a two-year-old youngest person injured in yesterday’s “Fortuner” accident case in Patiala.

As confirmed by his family members Ansh was referred to PGI Chandigarh, early in the morning at around 2 am, where he succumbed to his injuries, late in the evening. His body will reach Patiala, by midnight.

He was going on a bike with his uncle (Mama ji), sister, pregnant mother, when the speedy Fortuner driven by Prithpal Singh hit them at Thapar college traffic lights. He got head injury along with other injuries. His uncle, mother, sister also got severe injuries.

With Ansh’s death the casualty rose to two, in yesterday’s accident.

One Paramvir Singh, a student of DAV Public school, a Thapar college employee is still critical and on ventilator support at local private hospital-Columbia Asia hospital. 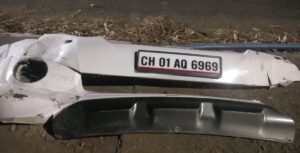 Excise official who mowed down one; injured five outside Thapar college in Patiala; not arrested