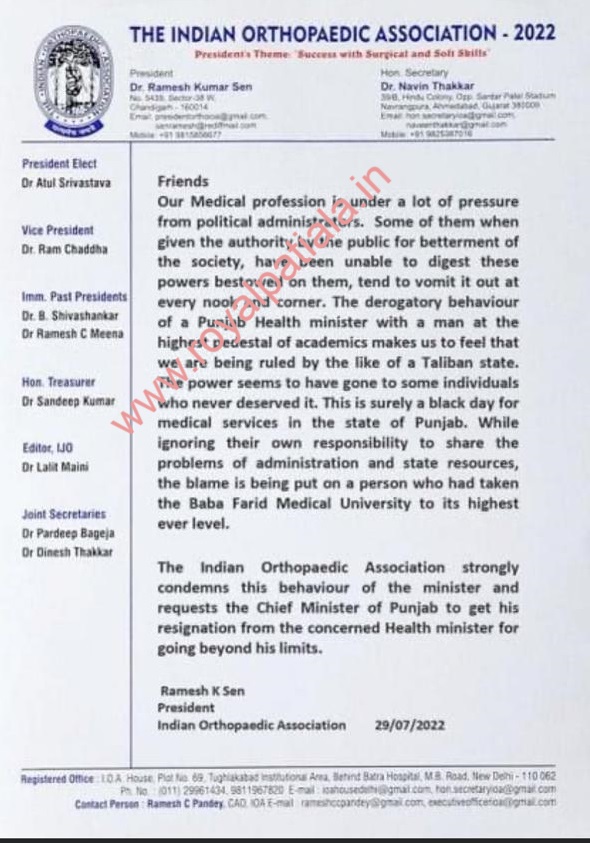 In a strongly worded letter by IOA President Dr Ramesh Kumar Sen to the members of Indian Orthopedics Association read “Our Medical profession is under a lot of pressure from political administrators. Some of them when given the authority by the public for betterment of the society, have been unable to digest these powers bestowed on them, tend to vomit it out at every nook and corner. The derogatory behaviour of a Punjab Health minister with a man at the highest pedestal of academics makes us to feel that we are being ruled by the like of a Taliban state. The power seems to have gone to some individuals who never deserved it. This is surely a black day for medical services in the state of Punjab. While ignoring their own responsibility to share the problems of administration and state resources, the blame is being put on a person who had taken the Baba Farid Medical University to its highest ever level.”

“The Indian Orthopaedic Association strongly condemns this behaviour of the minister and requests the Chief Minister of Punjab to get his resignation from the concerned Health minister for going beyond his limits” said Dr Ramesh Kumar Sen, president IOA.

Meanwhile, Dr JPS Walia, a renowned orthopedician of Patiala and former chairperson and president of  Punjab State Medical and Dental Teachers Association, and former President of IOA, North zone has also condemned yesterday’s incident and said “this is surely a black day for medical services in the state of Punjab and this type of mal treatment was not expected from the health minister of a state.”

Another jolt to Bhagwant Mann led AAP govt; black day in the medical history of Punjab